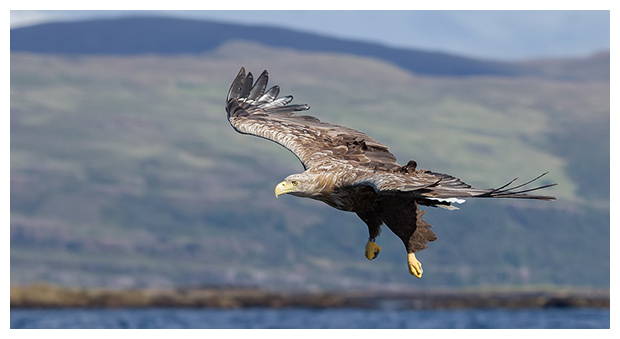 Seeing your first white-tailed eagle is unforgettable. Mine was during a trip to Skye, from a small boat bobbing around just outside the shelter of Portree Harbour, in the pouring rain. The eagle was sat in a tree on the side of some steep cliffs, and was tempted down to our boat after the skipper threw a fish overboard. Massive wings unfolded and it drifted down towards us, circling briefly before swooping down at a pace that defied the size of the bird, to snatch the fish from the surface, and powerfully flew back to those cliffs once more. The whole sequence was over in a matter of seconds, but I was smitten already.

Since then I have spent hours watching and photographing these majestic birds, and never grow tired of any sighting of them, be it a distant speck drifting over a mountain or one perching up on a rocky outcrop beside a loch, only a few dozen yards from my car. 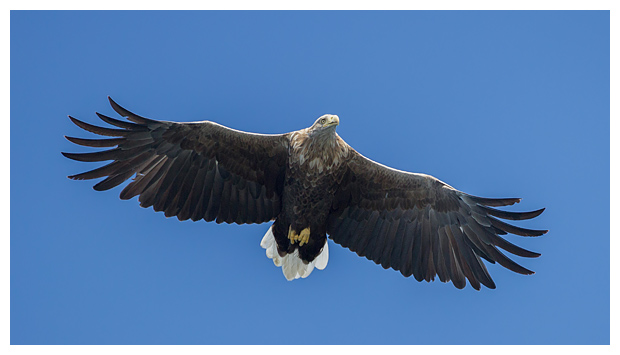 Unlike golden eagles, that can in certain situations resemble buzzards, white-tailed eagles are unmistakeable. The breadth of their massive wings make them very easy to identify in flight, and provide ample reason for their nickname of "flying barn doors".

Fully mature adults have the characteristic white tail, and the feathers on their head can be paler too. Not quite the white colour of a bald eagle, but apparent in comparison to the rest of the bird.

The beak is also enormous - considerably larger than the golden eagle's and must be perfect for tearing up the carrion and fish that make up the majority of their diet. 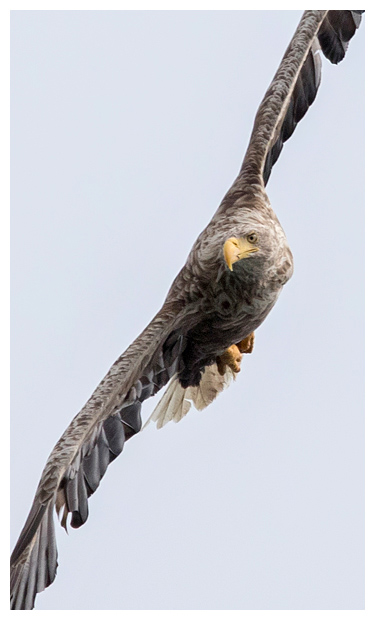 It is difficult to gauge how huge the eagles are though. And how strong they are. One experience sticks in my mind for this, and again was on Skye. It was the last of our boat trips, and the eagles weren't coming down to the fish being thrown out for them. Knowing we were on our last trip, and appreciating that we'd been on several over a couple of days, the skipper collected the small fish that had been thrown, and disappeared into the cabin to get something larger.

Appearing with a ling, which was as long as the skipper was tall, he then launched this more appealing meal into the water, and waited. This was obviously worth the effort for the eagle, and down it came at last. The skipper had had to hold the fish with both hands, and it'd taken quite some effort to hurl it over into the sea. The eagle snatched the fish, with just one foot, its long sharp talons gripping it securely, and as it had with much smaller fish, it flew off back to the nest area again. It was this sight, the size of the eagle's foot carrying something that had been so enormous on the boat, that rammed it home just how massive these eagles are. 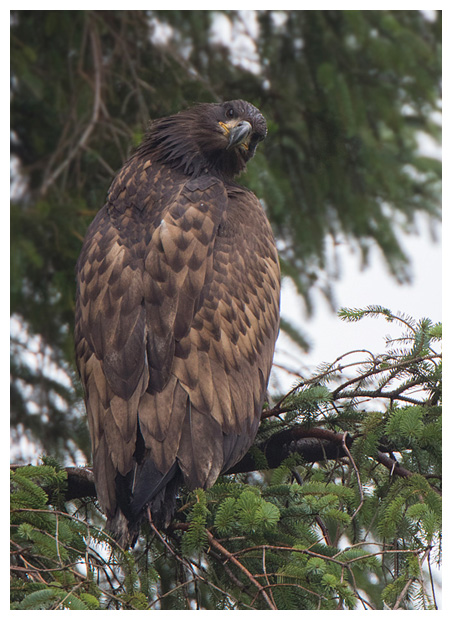 Even as youngsters, they are huge. I recently photographed a fledgling on the Isle Of Mull, that was a mere four months old, yet it was as large as the adult birds and capable of flying low and skillfully along the shore, or soaring so high into the sky that it vanished from sight.

When leaving the nest, the young eagles are mostly brown in colour, with dark brown heads, tails and primary feathers. Their beaks are also dark tipped, though no smaller than the adults!

Like many birds of prey, white-tailed eagles are lazy and prefer to wait for food to present itself to take advantage of, rather than chase it down and kill it for itself. Carrion forms a large proportion of their diet. Soaring over the hills and scanning the shore, coupled with their incredible eyesight helps them spot opportunities from afar.

That said, they will take fish from the water, and while slightly artificial, this can be witnessed at close quarters from the boat trips, such as Mull Charters. It should be noted that this "feeding" is done in a controlled manner, to ensure that the eagles do not become dependant on the boat trips for their food. Something apparent on trips where the eagles fail to come out to the boat, as they already have food available, perhaps from a carcass or prey caught earlier. 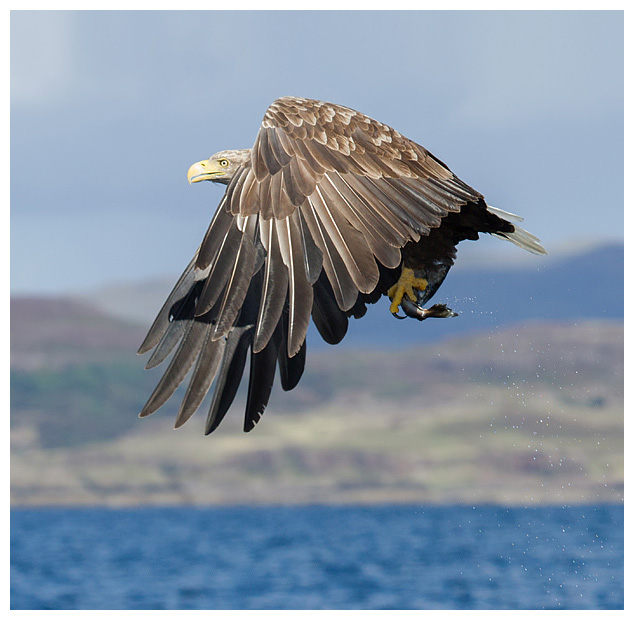 To see the eagles hunting in the wild is breathtaking. I have witnessed this on a number of occasions on Mull, and it is something truly special to see.

When hunting alone, the eagles will make use of the weather. I have been out on days when the clouds are lying only a couple of hundred feet above the ground, and spotted the eagles hanging in the breeze, just touching the clouds, using them to hide their presence. From this lofty, shrouded position, they can swoop down in a matter of seconds to grab prey.

And the prey can be surprising too. I have seen them go for geese and grey herons, plus pheasants seem to be a popular snack. Mountain hares and rabbits are part of their diet, and of course fish too. I have even seen one chase a gannet across a loch one misty morning. The power and speed of the eagle in pursuit was startling, and the gannet had to fly at top speed to make its escape. 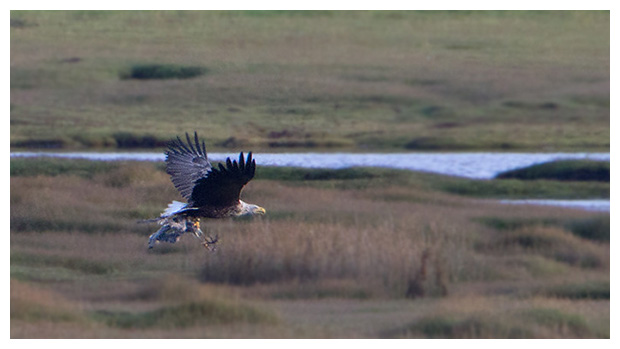 I remember watching in awe as they hunted as a pair. Sat in my car hoping for views of hen harriers, I was keeping a vigil on anything moving around the marsh area. Hence I noticed when a white-tailed eagle sailed over me, and headed towards the flocks of geese feeding on the grass beside the river. All hell broke loose, as the birds also saw this hunter approaching but the eagle didn't dive for anything. No, it was merely creating the chaos for its partner to make the most of. Enter stage left, low down, skimming the tops of the long grass and reeds, came the partner, like a missile to pin down a young grey heron caught up in the confusion.

After subduing the leggy prey, it was carried back to the nest nearby for a youngster to tear to pieces, no doubt.

One year I watched a pair of white-tailed eagles taking advantage of a boom in fish populations. Whitebait numbers were up and hence the waters around the Isle Of Mull were heaving with mackerel. Chasing the whitebait into the lochs, both species were drowning in the fresh water, and when the tide retreated, the fish were being washed up on the shore or left in pools on the rocks.

They're not fools, these eagles. They found themselves a good viewpoint in a tall conifer, and watched the gulls below. With every lapping wave on the shore came another dead fish, and the gulls would drag fish worth scavenging ashore to eat. Anything of a decent size would attract the attention of the larger gulls, and in turn, caught the eagle's eyes. And that would be enough for the eagle to swoop down, to steal the fish from the rather annoyed gulls.

This theft of food is common and otters are also watched by the eagles, and can have their spoils stolen if they're not careful with it. 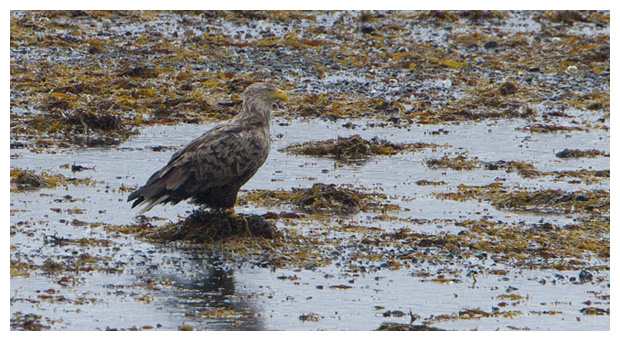 As mentioned above, the isles of Mull and Skye are hotspots for seeing white-tailed eagles, as is most of the West Coast of Scotland. There is also now a growing population on the East Coast of Scotland (around Fife), after reintroduction projects proved to be successful there too. Individuals are occasionally seen south of the border, usually juveniles along coasts. But they never seem to stay for long. 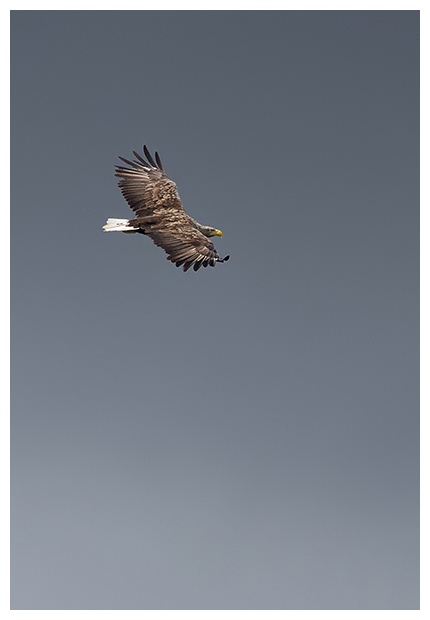 Spotting them can be made easier if there are flocks of birds around, such as geese or gulls. If they all suddenly go up in a mass panic, it's often because a white-tailed eagle is in the area.

They also like to sit beside the shore on rocks or even on the beach, waiting to see what the tide might leave for them. Despite their immense size, they can be easy to miss when sat on a beach, as they blend in so well with the surroundings.

In flight, well, just look for something akin to a barn door drifting across the sky... 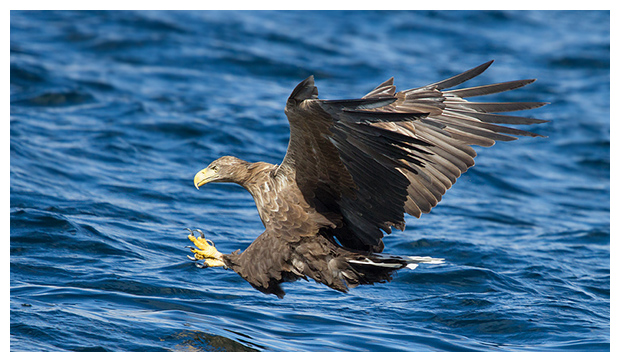 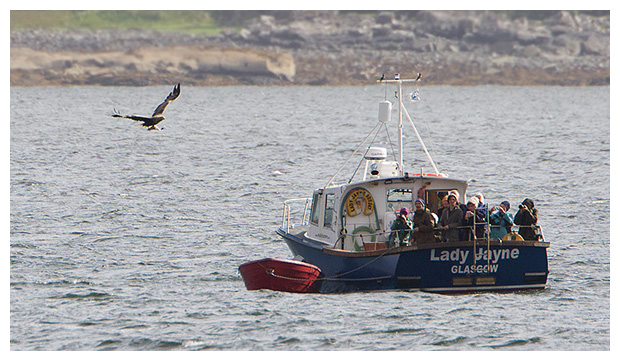 Without doubt the best way to photograph these magnificent eagles is from one of the boat trips that attract them in close. Provided the eagles take the bait, and come out, then you're guaranteed to at least see them at close quarters. Getting a photograph isn't quite as simple as it seems, as despite being huge, they're not slow.

It can be only a few seconds between the eagle circling over the boat, to it diving, taking and flying away with the fish.

Choice of lens, exposure and focusing modes can make a huge difference to what images you come away with. And to make things trickier, the weather, lighting and movement of the boat all play a part. I've been on a couple of trips where it has been a challenge to remain standing up, let alone track the eagle descending like a bullet to take the fish. 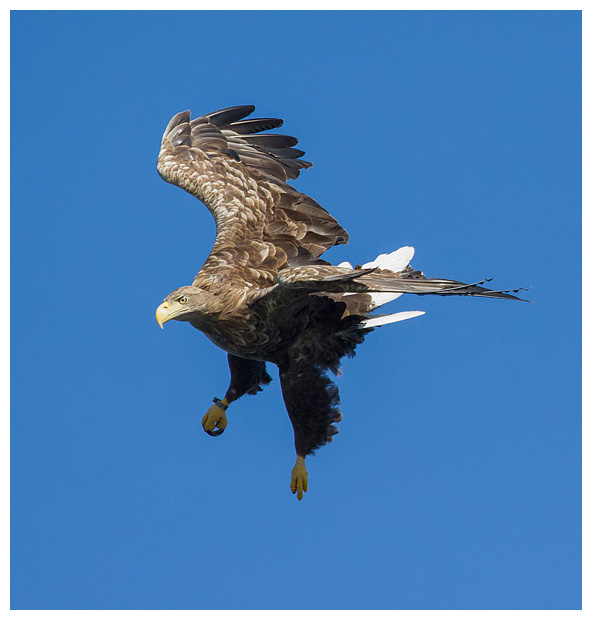 As I have been on so many of these trips now, I can offer advice on how to capture images, and two of these trips feature in the Mull Summer Photo Tours I co-run each year. They're definitely the highlight for me, as I guess may also be the case for some of the clients too.

Aside from the boat trips, great views can be had on dry land, if you choose to visit an eagle watchpoint. Here, a Guide will lead you to a safe (for the eagle) viewing point to look at perhaps the nest or any perched adults nearby.

From close encounters on land or at sea, distant views of them soaring on thermals or hunting low down, from adults expertly picking huge slippery fish from the water to fledglings battling to peck a morsel of meat from an old carcass, watching and admiring white-tailed eagles is something to be treasured, and is something I will never take for granted.