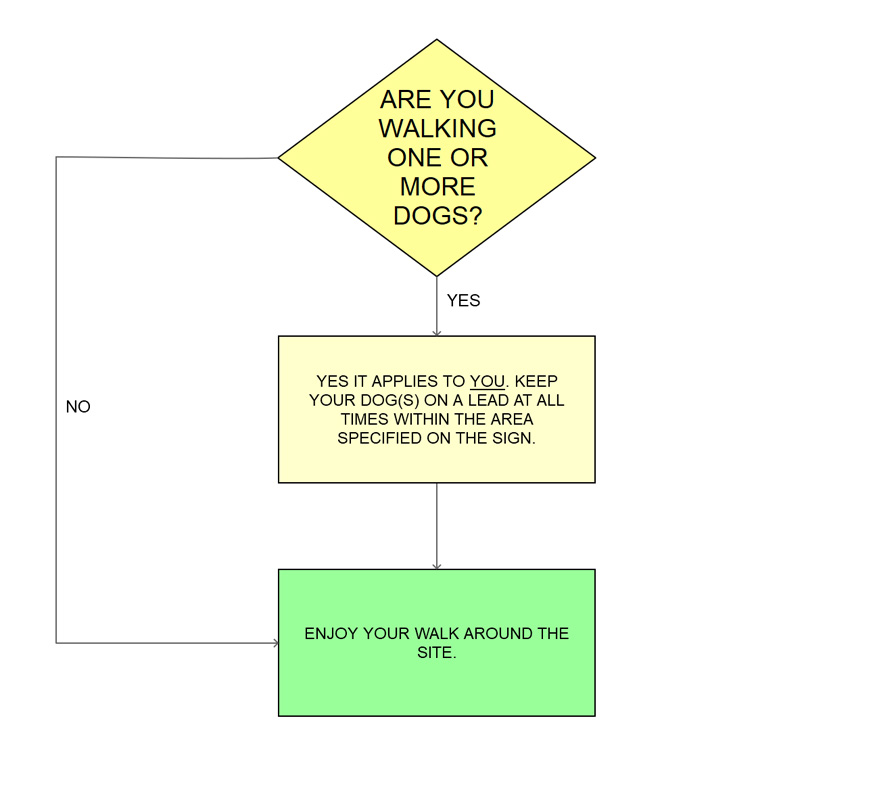 I've created this handy flowchart for anyone walking a dog, and encounters a sign asking them to keep their dog on a lead...

Earlier this year, I visited a nature reserve which is open to the public. I was there looking for adders, the UK's only venomous snake. These shy, elusive creatures are mostly found in one area of the reserve, and as such, gates accessing this section all have signs on them, clearly stating that dogs must be on a lead within the area.

Not difficult, one would imagine? Not too much of a nuisance, for part of an enjoyable walk in the countryside?

Apparently it is far too much trouble. As I saw just one dog on a lead, during half a dozen visits to the site, and even that owner had a second dog, roaming free away from her.

If a dog disturbs an adder, it may well get bitten, and sadly in a lot of cases, the dog will die from the snake's venom.

This week, I visited a different site, hoping to perhaps see some lizards basking in the sunshine, or maybe spot some of the returning migrant birds, as they begin to nest for the season. The site has several winding, looping pathways through the reserve, but some were closed off because of breeding birds. I could read the signs easily. Because I have eyes, and I can read.

Yet all the signs accessing the reserve, asking dog walkers to keep their pets on a lead were apparently invisible, as all but one owner I saw, were walking them off the lead.

I have, on a few occasions spoken to dog walkers. I have been told to mind my own business, looked at as if I was talking in some foreign tongue, or in most cases, told that the dog in question is "very well behaved and in sight at all times, so can't be doing any harm at all."

Really, as I've just watched the dog bounding through the undergrowth, with the owner nowhere near, and certainly out of sight.

Most dog owners have, since the "Pick It Up" campaign, become a lot more responsible when out walking their beloved pets, so why can't they continue such good behaviour when it comes to nature reserves?

If there's a sign on the reserve (and some are even kind enough to state dates when the dogs can roam free) asking you to keep your dog on a lead, do it. It's not there for your inconvenience, it's there to protect the wildlife.