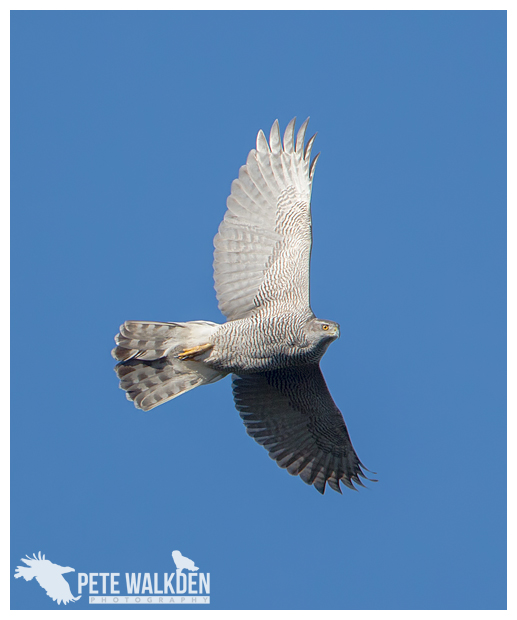 For the last three years I have, at the end of Winter and beginning of Spring, stood like a lost soul in some woods in Shropshire, staring longingly at the skies.

This isn't because I'm insane, though that does help somewhat when nothing is seen for hours at a time, but because it's a spot where I occasionally see the Ghost Of The Forest break cover, and display.

The goshawk isn't by any means a rare bird. Thankfully their numbers have recovered since being persecuted to the brink, but they are very difficult to see, and even more troublesome to get a decent image of. I know, I have spent weeks trying.

However, as with most things in wildlife photography, if you're prepared to put in the time, eventually you may get a slice of luck and an opportunity, which I was ready for on one bright sunny day in February. With the glorious clear blue sky as a backdrop, I spotted a goshawk circling into view, and as it turned, I grabbed a series of shots.

This particular image was one I posted on to Bird Guides to see how it'd fare in their weekly photo contest and to my delight, it won Photo Of The Week.

We don't get to see too many images of Goshawk on Iris, especially from the UK; postings have just about reached double figures over the last couple of years, so this stunning shot by Peter Walkden deservedly takes the winner's pedestal this week.

The power and poise of this species is there for all to see in this shot and with a perfect blue sky as a background it doesn't really get much better than this; OK, one wing is in the shade before anyone says anything, but I think most of us would be very, very happy to have taken this one.

Fast shutter speeds are the norm when photographing any species of hawk in flight and Peter set the ISO to 800 to achieve 1/2500th second, at f6.3 aperture, using a 500mm lens with a 1.4x converter.

Congratulations to Pete on his POTW; also the first time a UK Goshawk has had the honour.

Definitely worth a stiff neck and cold toes!