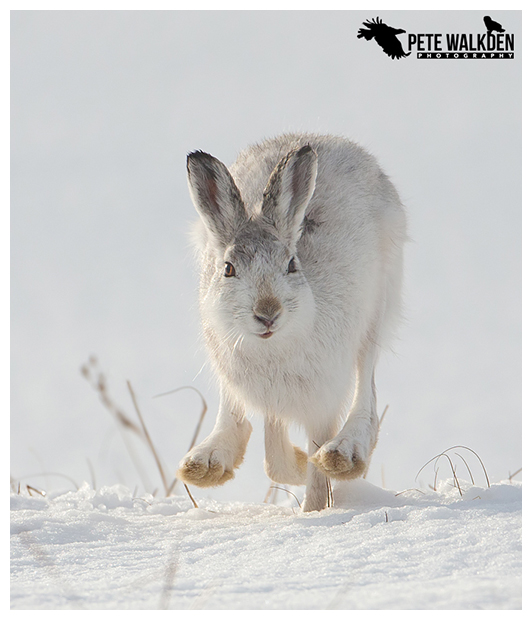 My last few trips to the Scottish Highlands have involved at least one visit to see mountain hares, and I have returned with yet more images of them sitting, sleeping, yawning, grooming, eating and occasionally running.

I had, to my shame, started to think that this was all there was to see of their lives, and finding different angles or using tight or wide views to vary the end result was becoming increasingly difficult.

Then I ventured higher up the slopes on my last visit, and witnessed the spectacle of their battles for mating. Chases, fights, mating itself and even some humour.

It was of course, some Mad March Hare action, and I loved every second of it.

While other photographers on the hills were creeping around in the snow, trying to get close to the hares for portrait shots, I found a good spot for watching the surrounding area, plonked myself down into the snow, and sat patiently.

Initially nothing was within range of a shot, but over time, the hares strayed closer to me, and started to ignore me. By limiting my movement, moving slowly when I had to (cramp in my leg was one reason!) the hares I hope, realised I wasn't a threat.

I left the hills with a bucket-load of action images, as well as some portraits when they chose to come very close, but the icing on the cake were shots of hares running towards me.