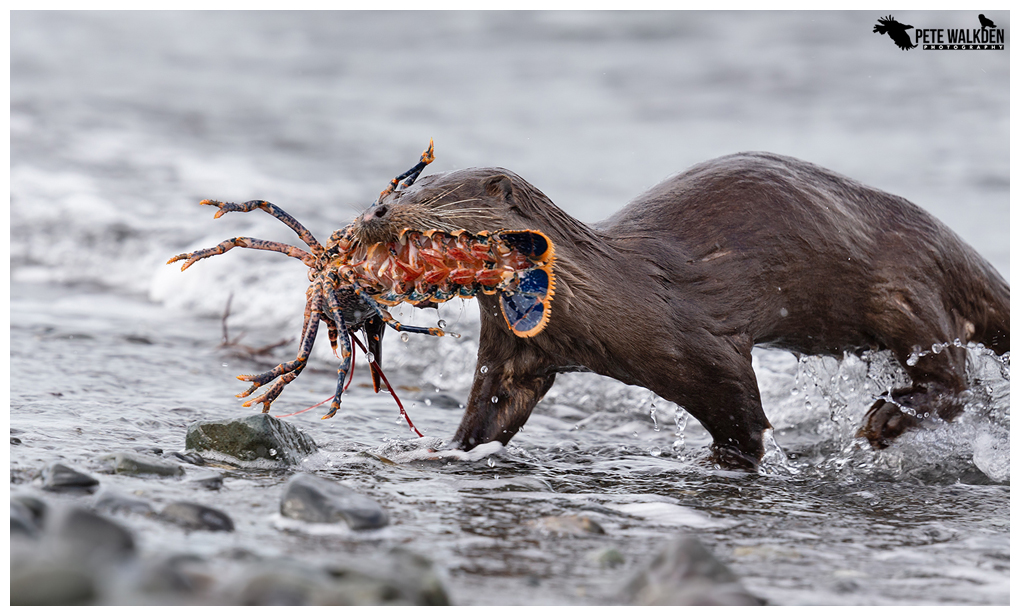 Choosing March's IOTM was as easy as it's ever been. Right at the beginning of the month, there was a moment that stands head and shoulders above anything else that followed, and might perhaps be the image of the year, if I did such a thing.

On the morning before I was due to greet my client for a workshop on the Isle Of Mull, I was sitting in my car watching a mother and cub, out fishing in one of the lochs. I was making notes on where the otters were fishing, sleeping and what time they tended to be out. I had done so since arriving on the island a couple of days before.

Suddenly there was a commotion out in the water, with splashing and a bit of squeaking, before one of the pair started to make a bee-line for the shore. I thought, what the hell, grabbed my coat and camera, and hot-footed it across to where I guessed the otter might come out. Settling down into some rather slimy seaweed, I set the camera up and waited.

I was actually wrong with my guess, and she appeared on the beach area closer to where I was hiding.

Now, many years ago I was on the island with a friend, Ian. He and I were in separate cars with CB radios to communicate, and mine burst into life suddenly, with Ian telling me he'd got an otter with a lobster. I was watching goosanders about half a mile away and decided not to drive back for fear of disturbing him, and costing him the shots. He nailed some absolute corkers.

Roll forward a few years and perhaps this was my reward for that act of unselfishness? The otter broke through the waves and scampered up the shore. I grabbed as many shots as I dared, and then watched her deal with what can't be an easy thing to eat, with relative ease.

After about a quarter of an hour, she had eaten what she had wanted, and returned to the water again. Her cub, almost fully grown now, had swum past while she was dining, but she'd ignored him! She swam off in the same direction.

Two thoughts went through my head at the start of the encounter. Firstly I wished Andy Howard had been next to me, as he so often is when looking for otters on Mull. He's desperate for such a shot for his forthcoming book on otters. And secondly, I thought it was a shame the encounter had arrived before my workshop had begun.

Nevermind, we enjoyed some cracking encounters during the next three days, and while I was running that, my press agents were hounding me for the images.

This one, featured as a full double page spread in the Guardian, which was very pleasing indeed, and had something like 4000 likes on Twitter.

As I say, an easy choice for the month!